This book didn't work for me. The story fails to create any real tension. The situation seems overly contrived. The ongoing narration trying to tie it to the previous Alex Barnaby stories are flat. The art is totally out of sync with the characters created in Metro Girl and Motor Mouth. I won't be bothering with the follow-up chapters.

View all my reviews
Posted by Bill Weinberger at 10:57 AM No comments:


Cherie Priest scores another hit in her rich world of an alternate 19th Century USA in which the Civil War is stretching out for decades. She creates very distinctive lead characters and then does a good job of putting them through the ringer in this short (208 pages) book, picking up the thread of a plot about escaped slave and air pirate Captain Croggin Beauregard Hainey, who had a small part in the novel Boneshaker. In pursuit of him is a new character, too-famous-to-be-a-spy ex-Confederate spy Maria "Belle" Boyd, now working for the Pinkerton Detective Agency on behalf of the Union Army. The whole thing is an enjoyable and all too short romp that reminded me of one the better episodes of The Wild Wild West. Belle Boyd would certainly give James West a run for his money. [More]

View all my reviews
Posted by Bill Weinberger at 8:53 AM No comments: 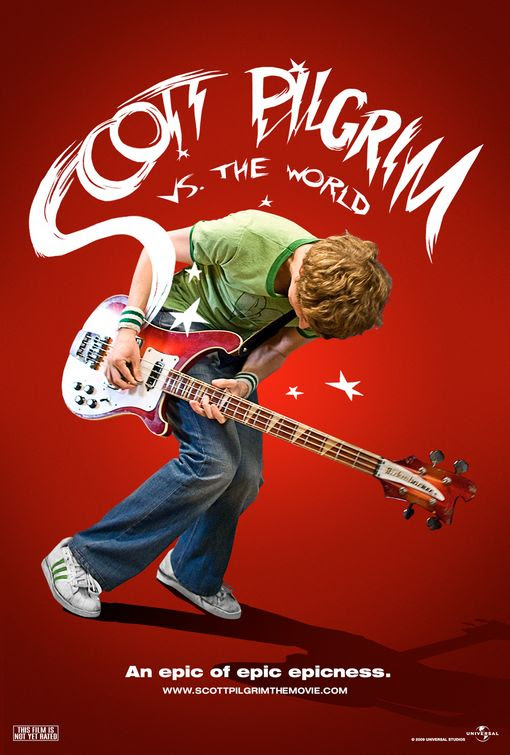 The unreality of Scott Pilgrim's world in many ways is actually more compelling than the unreality rendered in Inception. And it's just as well done. And more novel, with video game and pop culture references used in ways that have not been seen before and a sense of pacing and humor that just won't quit.

The script does a good job of taking us through the story of Scott's journey through the "league of seven evil exes", which is also a voyage through discovery of Ramona and himself. The acting and directing are suitably tongue-in-cheek, without be too cheeky. The special effects serve the story, rather than the other way around. And even though the entire film is about video game fighting, its climax doesn't fall into the action movie trap of depending on the repetitious raising of shoot-em-up heroics for the fate of the world. It all stays relevant and personal.

Definitely an awesome summer movie that deserves to be seen on the big screen, but will probably do better business on video.
Posted by Bill Weinberger at 4:36 PM No comments:

read: Agent to the Stars

Agent to the Stars by John Scalzi


John Scalzi notes that he wrote Agent to the Stars as a 'practice' novel. As someone with several first-draft practice novels hidden on my hard drive, I should probably be intimidated by how good this one is. On the other hand, I have no doubt quite a bit of work, and several drafts, were put in before 'Agent' ever saw the light of day.

I detected several signs of a first novel. A simple plot. Long sections of exposition. A sudden romance. Obvious foreshadowing. Aliens that are a bit too conveniently anthropomorphic (not in appearance, but thought and speech patterns). Even so, 'Agent' is a quick, humorous read that skewers both science fiction tropes and the entertainment industry with an interesting concept, some plot twists that keep you guessing, and fun, colorful characters.

View all my reviews >>
Posted by Bill Weinberger at 7:30 AM No comments:


Jim C. Hines weaves a marvelous yarn about three princesses in a world where magic has consequences, fairies are real, and 'happily ever after' isn't the end of the story. Unlike many recent books that take classic stories and try to make them into 'Buffy the Vampire/Zombie Slayer' or a series of films that makes fairy tales all about pop culture, this book takes a fresh approach to these traditional stories without getting too far out of character.

Snow White, Sleeping Beauty, and Cinderella know about the legends that are being told about themselves and each other. Legends that are only partially based on the truth. In due course, we learn more about what 'really' happened to each princess, all because Cinderella's step sisters decide to fight back.

Rather than add a thin patina of quaintness over a modern story with modern characters, the author creates a familiar world still a long time ago and far, far away and extrapolates what makes sense in that world. The result is a well told story that has both humor and danger and is just plain fun to read.

View all my reviews >>
Posted by Bill Weinberger at 7:43 AM No comments:

Anybody excited about the new 'Hawaii Five-O' starting this fall? I'm skeptical, but might watch it to see what they do with Daniel Dae Kim ('Lost') and Grace Park ('Battlestar Galactica'). In the meantime, the new opening sequence, with a brand new, yet retro, version of the theme is out. Thanks to Ken Levine (Hawaii 5 0 -- then, now, and the one that didn't sell) for pointing out good renditions of the original and new versions, plus a remake from 1998 (starring Gary Busey?), of which I was not previously aware.


Bonus #1: The Ventures performing their version at their induction into the Rock and Roll Hall of Fame (jump to about 7:10 or follow this link)

Bonus #2: One more for those that can't get enough
Posted by Bill Weinberger at 3:26 PM No comments:

Granted, it's only a first draft of a very short story (about 1200 words), and it's not even science fiction or fantasy. But it's something. And I wrote it in just one day.

The impetus is a fiction contest for an upcoming writing conference. I took another class, "Introduction to Mystery Writing", with Leslie Adkins, on Saturday and she mentioned the conference and the fact that it's a small enough conference that the number of entries into the contest that goes with it is even smaller than usual, increasing the chances of winning. To top it off, she sounded pretty disappointed in the quality of entries in some recent contests. With my usual attitude of "I can probably do better than that", I figured it was worth seeing what I can come up with.

I pulled out an old story idea and went to town, getting the first few paragraphs down in the morning and then stewing about it off and on during the work day. By the time evening rolled around, I had some good ideas and spent a couple of hours finishing it off. I thought for sure I had written more than the 1500 words called for. But when I ran it through word count, it looks like the story has a little room to grow, if it needs to.

The next step is to write an alternate story, completely different. Then come back and do a second draft of this one, followed by a second draft of the second one. I have about a month to select one, finish it off and send it in. If I do it, it will be the first story I've submitted for more than casual reading since my really bad fourth-dimension story I did for a class in high school.

In any event, it feels good to actually finish something, no matter how small.
Posted by Bill Weinberger at 7:44 AM No comments: