This was my 13th attempt at NaNoWriMo. It is now my 3rd instance of not finishing (see 2009 and 2013). I have mixed feelings about this, as usual. I'm obviously disappointed. This is something I look forward to and boast about and enjoy. Mostly I'm relieved. What are this year's excuses? 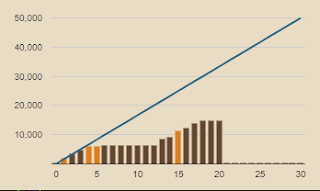 Basically, I had 30% of my words and was 60% into the month. That looks like I was halfway there. But look again. I needed to produce 70% of my words in only 40% of the month, with more holidays and family time in the mix. I can write pretty quickly. But I've never been one of the NaNoWriMo overachievers that cranks out 50,000 words (or even 25,000 words in a single week).


On the good side:
So, pass the remote and bring on the turkey. I have some shows to get caught up and some holidays to enjoy. I should get back to the gym, too.
Posted by Bill Weinberger at 6:05 AM 1 comment: